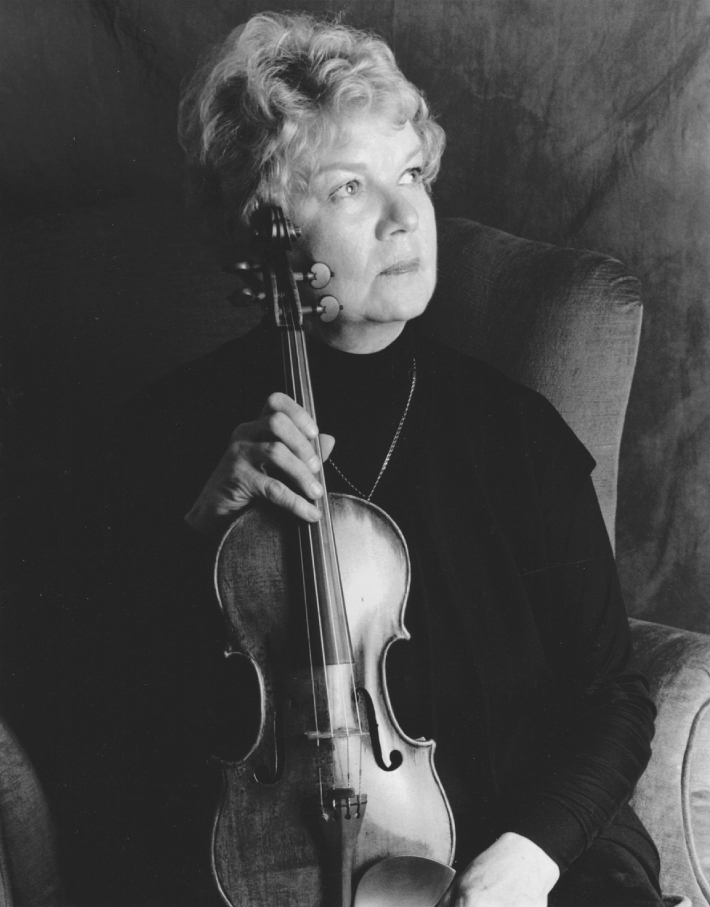 The film documents the life of Andrea Hansen whose mother was from Myllykoski, Finland and father from a “new Finland” farm in Saskatchewan. Her parents met at a chicken plucking party and soon Andrea’s father winked at the beautiful Finlander whom he soon married.

Andrea’s mother had written to her uncle explaining that she had enough money to come to Halifax and she would come and work for him, if he paid for the ticket from Halifax to Saskatchewan. The young couple moved to Kenora, Ontario where Andrea’s father secured a job at a mine. When Andrea’s sister Florence was given violin lesson’s

Andrea would take out the wooden spoons and pretend she was also playing the violin.
Finally Andrea’s mother asked the teacher if she would spend some time with Andrea who was three at the time. Young Andrea was a “child prodigy” – which Andrea attributes to her Finnish grandfather. Lots of violin lessons and performances alone and with her sister established a career in the performing arts.

Much later Andrea and Florence had a night club act together with her sister Florence which lasted 25 years where they performed in places like Las Vegas for Guy Lombardo show. Then the sisters parted and Andrea was engaged with the Montreal Symphony and later Toronto Symphony. Somewhere in between the sisters entertained Canadian troops and Andrea was also competing for the Miss Canada Pageant title.

When touring the North with the Toronto Symphony on 1987, Hansen conceived the idea of opening the world of music to children in Tiny Arctic communities. Fiddling had once been a strong tradition, brought to the North in the 19th century by Scottish whalers, sealers and Hudson’s Bay Company workers, but had died out.

Andrea rekindled the tradition when she and Frank Hansen (no relation) a local businessman in Inuvik co-founded Strings Across the Sky. With the help of donated violins and financial help of many7 organizations, Andrea started teaching young people in the North. In 1999 Hansen and 34 northern youngsters raised the bow to their violin at St. Magnus Cathedral in the Orkney Islands of the north coast of Scotland. She had brought the students back to the place where the ancestors of the Arctic fiddle had set out more than a century earlier.

Filmmaker, Pirkko Karvonen had met Andrea Hansen in Toronto at the Suomi Koti, when she was documenting the life of Finns across Canada. The two formed a friendship and Andrea invited Pirkko to accompany her to the Canadian Arctic around 2005. A trip to Yellowknife followed with Pirkko filming Andrea’s teaching methods, then to Lutsel K’e and Kugluktug. Later years Karvonen filmed in Parry Sound, Ontario, where Andrea was teaching with First Nation’s youngsters.

In the spring of 2011 Andrea telephoned Pirkko that she was going to be teaching at Conklin, Alberta at a native community and asked her to come along. By this time Karvonen had retired from filmmaking, but with almost hundred hours of documenting Andrea, she decided to apply as an individual for some help from the Alberta Foundation for the Arts. Even in the slow economy, Karvonen was successful with her application and is very thankful for the grant from the Foundation to help to cover some of the editing expenses with the documentary.

The hands of fate were at play at the showing of the documentary on Andrea, all of a sudden the sound with the equipment did not come through. This presentation was all about sound – the sound of the fiddle! What to do? Andrea had given a short concert with Frank Hansen the co-founder of Strings Across the Sky at the beginning of the showing of the documentary, so the performance continued with Frank and Andrea.Then Hansen invited Lucas Karvonen-Lee from the audience to come and play with her.

This had not been planned ahead of time, but there was an urgent need. Andrea and Lucas interacted by showing how a young student learns to play the fiddle. If you want to know what is the difference between a violin and the fiddle, come and see the documentary when it is showing in your local city in the future.