Books show Finland through the eyes of two Canadians 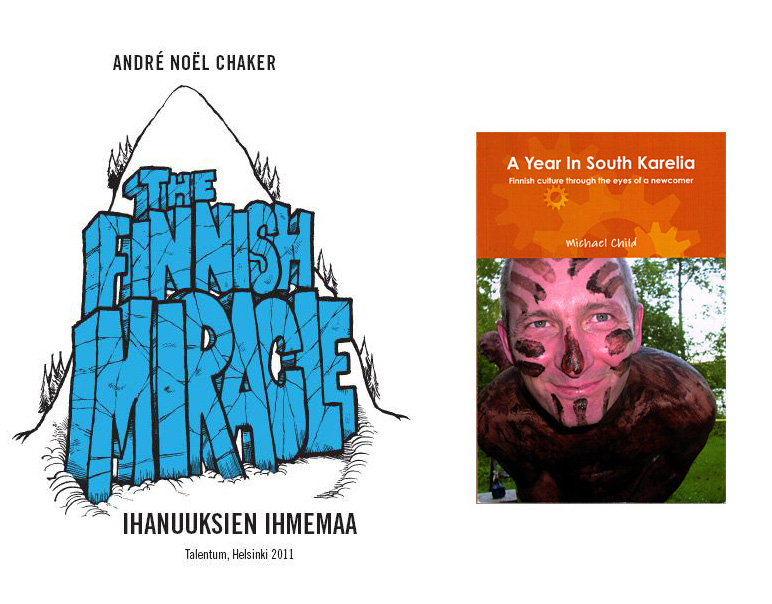 Canadians Michael Child and André Noël Chaker have both recently published a book where they present Finland as they see it. The first through the eyes of a teacher and a family man, the other as a business man looking for success.

Michael Child is a Canadian who has lived in Finland since 1998 with his wife who has Finnish roots. They came to the country with the intention of staying about a year.

– We are incredibly happy here. I’ve found a person that I always knew who I was, but didn’t quite know how to be. I doubt I will ever leave.

Child´s recently published book A Year in South Karelia is a sort of a diary of his experiences in the rural parts of a new country. Juhannus, mushroom picking, smokesauna and language mistakes get their part.

Even though the couple had studied Finnish at the University of Toronto, they soon found out that no one talks like proper Finnish in Finland, and language studies of the spoken Finnish, puhekieli, began again.

Another thing that still makes Child´s head spin was a KKK market.

– It seemed impossible to me that there was a place in the world that didn’t associate that acronym with the Ku Klux Klan, but there you go. I tried to understand it without bringing too many of my own North American values into the analysis.

– So, KKK means Kalle Kuronen ja Kumpp – the name of a popular chain of supermarkets. Here in Finland it has no other meaning. It was my job to change my way of understanding, not the other way around.
A surprising reason for their prolonged stay is something one does not often relate to the Finnish stereotype.

– A good deal of this happiness is due to how well we were received in this country. We have had an endless number of ‘guardian angels’, as we call them, who have helped us integrate into the culture.

– This hasn’t just involved family and neighbors. Sometimes it involved complete strangers. I am fully aware that the happiness of my family has involved kind and generous efforts of others.

French Canadian André Noël Chaker evaluates the strengths and weaknesses of Finland from the business point of view in his new book titled The Finnish Miracle.

Chaker is a lawyer who has lived in Finland over 20 years. He has worked in several international organizations and companies. To better understand the relationship between finnishness and success he has interviewed the top people from different fields in Finland.

– When I found myself in Finland and in the midst of the unique way of life, the country and the spirit of it had a an immediate impact on me. I realized there was something really distinct in being a Finn and I felt I had to write a book about it, Chaker tells.
Besides the positive characteristics Chaker finds weaknesses in the society.

– Finns do not like those, who after analyzing something conclude with only positive things about it. They do not trust that kind of a report.

Many of these downsides are the same as the positive observations. For example the strong emphasis on equality in the society leads to mediocrity, where the top group is not getting enough support.

Chaker sees the following things as the strengths of the country:
Trust, that makes things happen fast, and rationality are the cornerstones of Finnish leadership.
Sauna,that has developed a health attitude towards nakedness, opens the minds of the people and supports open communnication.

Strong aim for equality, that is promoted everywhere. Even in the single word for he or she. Voluntary group work talkoot, bilingualism, and no man left behind-attitude pursue the equality as well.
Education system, where children start the school later, and where soft and hard subjects are combined. According to Chaker, free, just and flexible education guarantees that small country gets the most out of its citizens.

The weaknesses according to Chater are: The relationship towards foreigners, mediocrity led by equality and little support for entrepreneurs. Envy and pity lead to super performers who have to do everything "right" and mistakes are not accepted. This environment does not support risk taking and trying.

Silence that promotes communication, is bad when there is too much of it. Same goes with too much trust on technology and using only rationality in decision making.