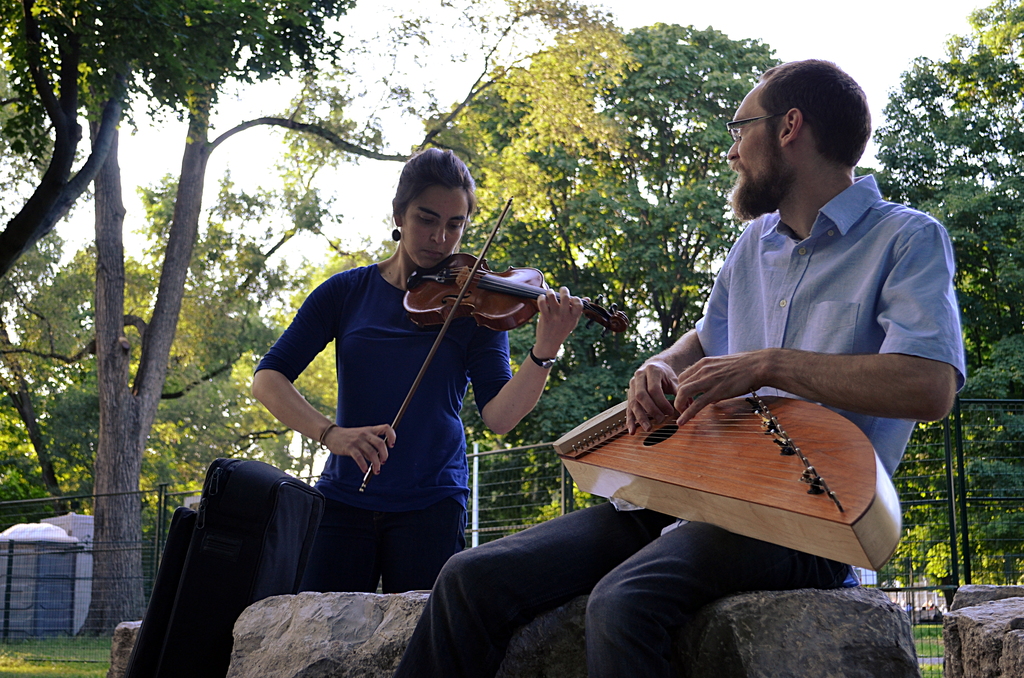 Matti Palonen and Sarah Boucher played a Finnish piece called Hannun Hambo as a duet of kantele and violin.

For a few months now Matti Palonen has been participating in weekly gatherings of folk music and dances. The group and an event by the name of Balfolk Toronto was established about a year ago by Torontonian musician Emilyn Stam.

First musicians and people with an interest in folk dancing started to get together to learn the steps for the French and Breton dances. Since then the community has evolved with dance teachers with for example Estonian and Ukrainian backgrounds. The Balfolk Toronto dance nights are mostly concentrated on western European folk music and dancing.

Palonen does his best to introduce Finnish folk music to the group of people with different cultural backgrounds. Peter Renzland, who is a familiar face from the Finnish Canadian Urheiluseura Sisu's folk dance group, is teaching Balfolk Toronto the Finnish folk dances. Also Sini and Mari Erme as well as Lili Ahopelto have found the group and added their finnishness to the mix from time to time.

"We are trying to build interest in Finnish dances and folk music in general and in preparation for the Finnish Grand Festival next summer", Palonen explains.


No need for a previous experience or knowledge


Balfolk Toronto is meant to be fun and not too organized way of learning and trying out folk dances. Whoever has the ability to teach others a new tune or unknown dance moves is free to step up. That's what Palonen ja Renzland did with the Finnish type of traditional music and dances. The Finnish tunes had not been played or danced to before they showed up.

"Right now there are about six or seven core musicians, including accordion, violin, clarinet, guitar and more rare hurdy-gurdy. I play the bass and kantele", Palonen explains.

Usually 20 to 30 people show up for the dance part, but they have not collected a specific record of the attendees. Palonen found the group by accident through Facebook. Mostly the word carries from mouth to mouth.

"Usually we don't know who shows up", Palonen says.

The point is to have fun and enjoy the social side of dancing rather than learning the steps by heart and preparing for a specific performance. Previous knowledge or experience of folk dancing is not needed. One can join from the street when passing by the place on Monday nights.

In the summertime Balfolk Toronto gatherings have taken place in the park. During the colder seasons the group has been having their meetings at a coffee shop nearby.


On a mid-July Monday the group was having fun with the traditional Swedish folk dance of hambo, which is slow and smooth but still a bit tricky and complicated. It originates in Sweden but spread to Finland in the early age. Palonen shared a piece called Hannun hambo, composed by Finnish Hannu Seppänen with the group.

Sarah Boucher, a Québécois born violinist, finds more rhythm in the European folk music than in its French-Canadian counterparts.

"French Canadian tunes are more like an engine. European pieces are more dancy and have slides and alterations in them", Boucher says.

Some of the Finnish traditional dances have so far been a bit too fast for the group to get a hang of.

"But we are working on that. People did like for example the Finnish polkka", Palonen says.

Usually the Nordic folk music is a bit quicker in pace than in the central and southern European. Boucher has her own theory about the why:

"They had to stay warm in the north, that's why they had to play and dance faster. That's my theory", Boucher says and bursts into laughter.