The Floridan small towns Lake Worth and Lantana together with Astoria, Oregon are perhaps the most recognized Finnish towns in the United States.
Although they border each other in North-South direction respectively, it´d actually be unfair to call them identical twins. They are just too different. Lantana who celebrates this year its 90th anniversary has about 10,400 and Lake Worth 37,000 inhabitants. 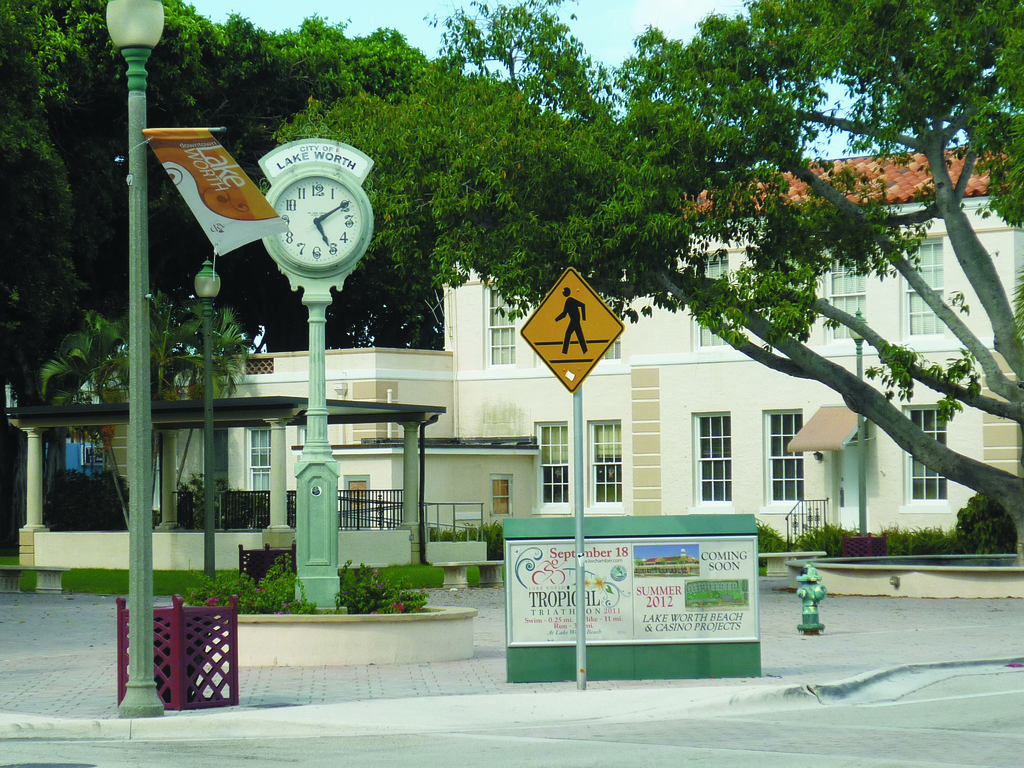 The first impression in Lantana is its open air, the streets are wide and houses usually further from the streets. Also, it´s hard to figure out where the hub of the city is, since the public city buildings are scattered here and there. One could say the city center has no center point at all.
Old and well kept buildings are characteristic for Lake Worth, of which they say there are more than one thousand in some seven square kilometer area. Many of them have been built with Finnish hands and sweat.

The small town main street is vibrant with life. It´s very compact giving a feeling of closeness with many small boutiques. One can spot arts galleries, antique stores, coffee houses, and a historic theater and museum. And next to all is a city hall as a guarding totem. Nightlife around the main street is vivacious and sounds of music and laughter echo everywhere.
Neither of the towns have high rise buildings, but only max four storey ones. The only exception is a little community of South Palm Beach squeezed between the two with its on-beach apartment houses.

Not the biggest,
but the showiest

Compared with the population Lake Worth and Lantana form together the biggest Finnish community in the world. About 1,500 first generation Finns live there. Nonetheless they are not the largest ethnic group, since the Latinos outnumber them and also Caribbean Creoles in Lantana. In Lake Worth, for one´s part a significant group of Guatemalan Mayas live there.
The Finns are however the most recognized, since one can see Suomi Talo or Finland House next to a shopping mall, and in Lake Worth they celebrate a traditional Finnish week every autumn.Both of the communities are also beach towns and they offer fabulous beaches for the visitors. Lake Worth´s public beach is wider than its neighbor´s one and she also has a big pier.

The center of social activity in Lantana is the end of Ocean Avenue. One can find restaurants, boat harbor and water shore activity there. Sea turtles nest in the beach and hence the warning signs remind people not to go too close. When the fledglings hatch out, it attracts lots of watchers on shore.

All the place names have their own story. Lake Worth is named after general William J. Worth who fought against the Seminole natives. In fact the whole lagoon is called Lake Worth or also an intracoastal waterway. The other town name is derived from a plant called Lantana by natives.

Only a crazy lives
in hot and muggy

Lake Worth become incorporated in year 1914 and Lantana eight years later celebrating now its ninth decade. First it was nothing but a fishing village. The first resident M.B.Lyman established there an oyster cannery.
The northern neighbour made early living with vegetable farming even though the soil was quite barren. But by year 1919 there was a casino and a wooden bridge over the lagoon.

But why did Finns settle here? One could think only a crazy moves to a place with hot and suffocating summers. Well, they have used saunas and got used to the heat and steam, perhaps this is an answer.
The Finns have a two-sided reputation there. The oldtimers were known for being trustworthy, skilful and hard workers, but also some of them heavy drinkers and sometimes havoc makers. Many bar fights, jealousy dramas and two opposing camps have made their life interesting in this state of perennial summer.
Now the old Finntowns have become less and less destinations for immigration, but more and more paradises for the hibernating retired people. They are well taken care of by many Finnish realtors in the area.