Meet Vesa Lehtonen, the New Ambassador of Finland to Canada 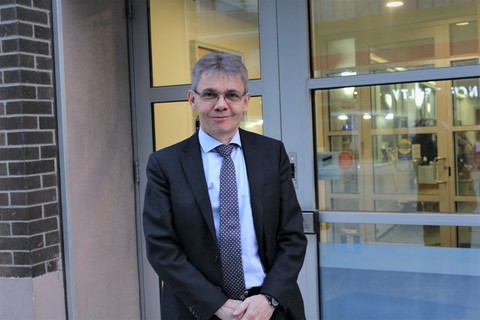 Charles Murto, the previous Ambassador of Finland to Canada, retired in the Autumn of 2016. The position was soon filled again when Vesa Lehtonen was appointed to serve as the Head of the Embassy of Finland in Ottawa.

Ambassador Lehtonen has had a long career with Foreign and Diplomatic Affairs: He has previously served in the Embassies of Rome and Stockholm, and worked as the Director of the Division’s Personnel Unit (2011−2012), the Head of the Division’s Personnel Services (2008−2011) and as a Counselor of the Central and South-Eastern European Unit (2001−2004) at the Ministry for Foreign Affairs in Helsinki.

The new Ambassador came to Canada with his wife Pirjetta Manninen and their two youngest children. He describes the transition easy. Lehtonen has spent some time in Canada prior to this and has, like many other Finns, Finnish-Canadian family members. The children have adjusted well to the new country as well.

"Canada does well with welcoming new-comers, whether it is immigrants, school kids or even ambassadors", says Lehtonen.

The beginning of the Ambassador´s diplomatic career here in Canada has been busy with meetings and trips. He hopes to soon be able to get to know the Finnish-Canadian community, as he has not yet had time to visit everywhere. Despite the busy schedule, Lehtonen describes his first months as the Ambassador pleasant. According to him, the relationship between Finland and Canada is friendly and the two countries are quite similar in many ways.

"The bilateral agenda is very positive", the Ambassador concludes.

One of the current matters regarding the two countries´ relations that the new Ambassador gets to be a part of is the new free trade agreement between EU and Canada. Lehtonen is pleased that the deal, also known as CETA, was made. He says it might help both Finland and Canada to increase their economic collaboration. The deal will make exporting products easier and cheaper.

Another important matter on the Ambassador´s agenda is Finland´s upcoming chairmanship of the Arctic Council. According to Lehtonen, this is another significant area of co-operation between Finland and Canada.

In addition to everything else, it is now the beginning of Finland´s 100th year of independence. The events and festivities of this centenary will keep the new Ambassador busy, as will undoubtedly the 150th birthday of Canada.

"This is a great year for Finnish Canadians. You have your own, native land that you can be proud of, and then your new home land to appreciate too. And you get to celebrate them both the same year!"