Only Ladies Choice dance is a real test to a man 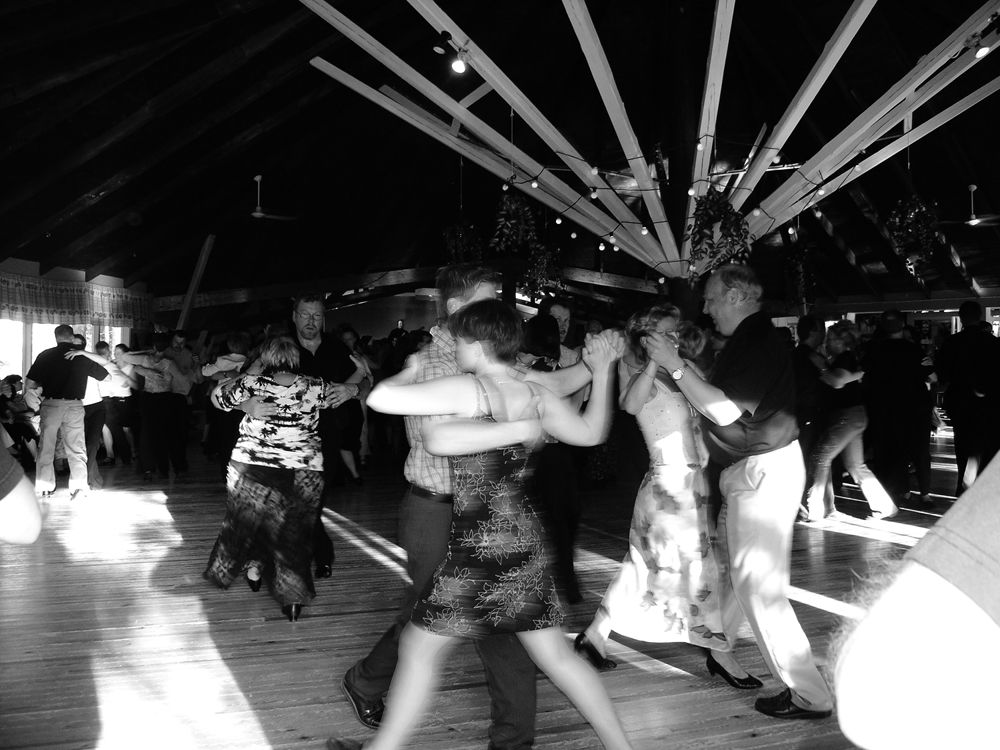 "Human heart is so small..." go the lyrics in one well-known Finnish tango. I woke up in the morning my heart pounding curiously. I had sweated and had a nightmare that June had 32 days. After opening my eyes I pondered what was all that...until I realized there was a Ladies Choice dance that night.
Since Suday I had planned of going to the summer season´s first Ladies Choice dance in our home county pavilion. Today I had to test what I was made of.
At work I was restless. My computer screen marched out attractive girls that smiled and curtsied to me and led me to a fiery tango. Occasionally in my papers read: "Educated city lady looking for the company of a decent man. Pseudonym: Life Sentence Together".
How did my day go I don't have the faintest idea, but here I was riding back with peculiar expectations. At home I first took a cold shower that cooled my blood and cleared my head and steeled my soul. Then I took a paper and read all the obituaries, births and wedding announcements, just to be in touch with real life. I also rechecked that the dance began at eight.
Then I ate a slight supper: half a liter of apple juice, soy yogurt, whole meal bread, avocadoes and a slice of date cake. Date cake for a date! ? Then I settled onto my garden hammock and took a nap. After an hour or so a noisy truck woke me up and I realized my h-hour was approaching.
I went to my wardrobe and rummaged it through. I hesitated between khaki shorts and white slacks, but leaned towards the latter ones, because when walking Her home at midnight it might be cool.
"The pants must be so well ironed that when a fly sits on the seam it will become split in two", said our sergeant in the army. So I ironed the slacks well and chose a green shirt with jungle look. Then a layer of gel to sculpt a lovely cowlick in my front hair and I was ready to rock and roll.

I could hear an inviting music even at the parking lot. The full moon was rising and mosquitoes danced in the grove. I felt my blood warming already.
I stepped in the pavilion. There were women of all walks of life; thin and plump, young and older, rural and city girls selecting the men with their keen eyes.
Next song was humppa, a lively Finnish style dance. Ladies picked their dance partners from both sides of me. A red head was taken right away and Mr. Buzzcut soonafter. "she'll come soon", I consoled myself. Dance after dance went, but she never came.
An orchestra switched to tango, but to no avail to me. A full figured high heeled brunette approached straigt to me, but in the nick of time circled past. Mr. Buzzcut got lucky again. A top heavy slim woman glued into him like a leech into a calf. Did I choose a wrong-colored shirt, since I managed to hush everyone away? Well, an evening was still young (=it was still early?).
So, I concentrated to follow other couples. A sturdy farmer was leading even tubbier countrywoman, I know the type. And, oh-mi-gosh, a young couple was kissing on the bench already. This dance was over, the band left for a break and I decide to go out to get fresh air.
Then, all of a sudden just out of nowhere a shyly smiling lady emerged in front of me, she curtsied and asked me for the dance. Oh, she didn't know but at that moment I was ready to do almost anything. I took a close-up position and felt her softness even in my spine. (I guess this doesn't translate correctly).
We curved by that overly popular Mr. Buzzcut and I kicked him at the ankle. He gave me an ogle: "Hey, look how you lead", he blurted. My partner was from Tervakoski, working in the dispatch department of a paper mill. She had come with her woman friend by her father's car. So, goodbye to an after hours stroll. The dance was over and I walked her back to the ladies' section.
I stood still when they played mazurka and cha-cha. Then an orchestra did a come-back. The singer started with a wild jive piece. And again, Mr. Buzzcut was picked up right away. What was the secret of his magnetism? Maybe he was a traveling salesman and offered a big discount for a book shelf set, or something.
Then I was pulled into a slow waltz. A thirtyish woman set the pace and took the leading role. But our choreography was fabulous. She was almost like flying above the floor. Why did she chose me, I ventured to ask. Well, to her I looked like a mysterious guy. Gee! The waltz was over and I returned her.

Soon I was popular and occupied a dance after dance. Did my luck change, or did the word spread, go and figure! There was a summer intern, hospital nurse, daughter of a big rancher, a divorcee, and many others who occasionally almost fought about me - their dance partnership. Now the evening proceeded rapidly and on its own momentum; foxtrot, rumba, tango, jenkka, salsa, polka...
Then it happened! To me tiptoed a voluptuous "Miss Finland", a woman of everyman's dreams. Raymond Chandler once wrote: "She was a woman, such a woman who could make a bishop to kick a chandelier in the smithereens". She was that woman. She smiled and extended her hand which I caught in awe. Her French perfume made me gasp, my legs felt weak, my heart palpitated like one of a chased hare. She was definitely out of my league.
We danced a slow swing hit wordless, chest to chest, me in the Seventh heaven. I wished the dance would never end. But it did, and the lady gazed at me so invitingly. In my ecstasy I couldn't act or think, a temporary idiocy possessed me. Fully lightheaded I walked her back.
The stars teemed in my eyes (Finnish expression). Like through a fog I realized the Mr. Buzzcut was picked up again, but who cares.
It was the last waltz. After that people, singles, couples and groups commenced to withdraw to the gate and parking lot. My dream girl, Miss Enchantress was also gone. The band was dismounting its equipment and the staff cleaning up the place. I was still standing at the doorway staring at nowhere. One of the staff blurted out:
"Hey, are you waiting for the sun to rise, or what?'. You better move, since this dance ticked has expired already ten minutes ago".