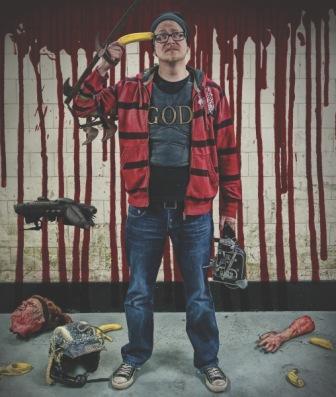 Self-taught film director Teemu Nikki faced his abashment and turned
his ruined effort of making a big time movie into an enlightening
document.

– I grew up in the countryside, basically in the forest, and there was
not that much to do. When my family got a VCR player my life got a new
direction. I would spend my days watching movies and finally wanted to
try to make them myself.
This is how director Teemu Nikki started his career.
He started making home movies, especially splatters, where graphic
violence, blood and guts play a special role in effects. After years
of home movies, Nikki started to dream about making a day job on film
industry.
– I did not get into any film schools, so I started working on the
field. First as an intern, assistant, roadie and so on. Finally I
started making my own projects, which gave me a chance to show my
skills.
As many other novice director, Nikki started with music videos and
then commercials. Finally, he had saved enough money that he decided
to make his dream come true and direct his very own full length
splatter movie that would be his ticket to Hollywood.
– I put all my eggs in one basket, making an English language
action-scifi-splatter Play God, Nikki now confesses.

Starting point was good. Nikki was able to get big names for both
sides of the camera and location and filming equipment mostly for
free. However the dreams came shattering down quite early when the
filming began. The script never existed.
Document Play God, shown also on the Toronto short film festival,
tells a story of everything going bad in making a movie.
– Document is an honest confession about a person having more
enthusiasm than understanding. About having lost all the faith in
oneself as a film maker, Nikki tells.
Get up and try again

Failure has however lead to something good.

– I was troubled for years by the failure of the film. It felt as if I
had betrayed myself and the crew. This document made me whole again
and made me believe in myself as a film maker again. It taught me that
failing is not that serious. One should always get up and try again,
Nikki now knows.
Teemu Nikki definitely got up and is finishing his first comedy as we
speak. He is not afraid of failing again.
– This movie will pull off, and it will do so because I have failed
and learnt from my mistakes. Now I know what to do.
What then is going to happen to the original Play God -movie, that was
fully shot, but ended up dying on the cutting board? Are we ever going
to see that?
– I do not think so. If some random millionaire wants to give a few
millions for finishing the movie, it is going to be a different
answer, Nikki figures.