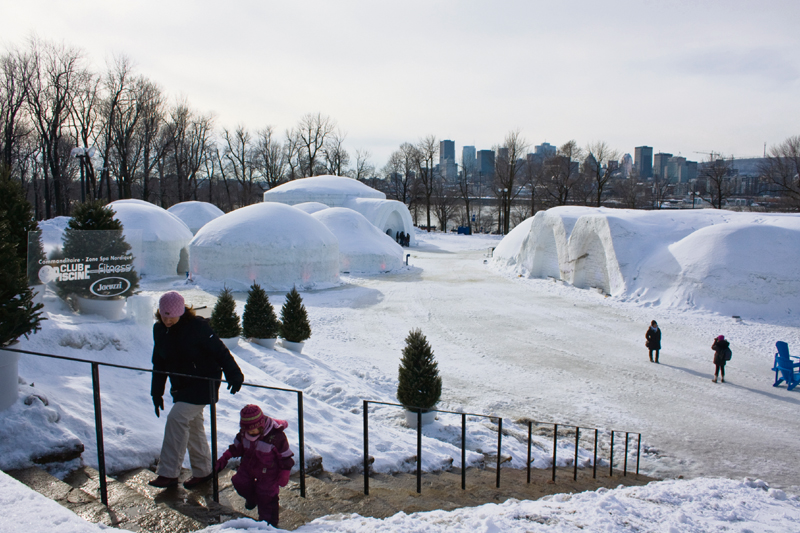 On a sunny day the snow village is full of people on the contrary to a day before, when the village was almost as if a ghost town. It was raining, the streets of the village were covered in water and there was no sight of tourists.
Now the bad weather is only a memory, although one of the igloos is closed because of water on the floor.
The world's first snow village in a city was opened in Montreal a few weeks ago. The location on Ile-Ste-Helene close to the city is convenient because one can access the village by subway.
The village has a hotel, a restaurant and a chapel that is full of people on a Saturday afternoon, even though there is room for 60 persons. This season there will be four weddings held in the chapel, first of them due to take place in two weeks.
At the moment, however, there are no ceremonies and tourists get to take pictures of the artful details on the altar.
But not everyone is interested in the bird drawings on the wall. A small boy is already asleep on the pulk and triple brothers Joey, Kevin and Lawrence prefer to eat the cookies their mother Chang is offering them while the father Jordan takes pictures.
The Chinese family has lived in Canada for almost ten years now and is visiting the snow village for the first time. So far they are impressed of what they've seen.
– This is a wonderful and amazing place, says Chang.

Originally the snow village was supposed to be only a hotel, but the Canadian business men behind the idea changed plans because they wanted to build something unique. There were already snow hotels around, one in Quebec for instance, but no snow villages. Or that's what they thought.
– When we googled snow village, it turned out that there was a snow village in Finland. We contacted the village in Lainio and told them we wanted to build something similar, says Marketing and Operations manager of the Snow Village Carl Fugère.
Soon the business men were already on a plane to Lainio, where the world's first snow village is located. The founders of Lainio snow village, Rami and Tomi Kurtakko were kind enough to give advice on how to build a village of snow and ice. Later they also came to Canada and helped to find a proper place for the village.
After some negotiating, Kurtakko brothers ended up directing the construction works in Montreal. They are also partners in Snow Solutions Ltd, which has built the village. The architects, engineers and designers planned the village for two years and it was built in three weeks.
– Rain causes damage and it also slowed down the construction work. We had six snow makers but not enough snow. Even now we need snow to fix the damages. Weather is our main challenge, Fugère says.

The Snow Village was opened on 18th January. In over two weeks there has been 25 000 visitors. The founders hope to have 80 000 visitors by the end of March, when the village is closed.
The Snow Village attracts people of all age from children to elderly. Montrealers Leonard Michell, his wife Lena, Lena's sister Laima and her daughters Marlin and Annette have come to see the wonder of winter.
– We thought that we have to see this before the snow melts. In winter there's not much to do and now the weather is warm. We didn't even have to travel far. The village was worth the money, it is a beautiful experience, they talk.
After visiting the chapel the group goes to see the hotel, which is one of the most interesting attractions. The hotel has 30 rooms that are used every night, but are full of visitors during the day as well.
Dressing warmly is very important, if one plans to spend the night in the hotel. It can be -5 degrees inside. Most of the rooms are for two, but there are also some big enough for families of four.
All the rooms have at least one bed made of ice but the mattress is normal and soft. Most of the rooms also have a chair or a couch of ice but one may not want to sit on them for long. The surface is too wet for that.

The rooms have different themes. The Canadian room, for example, has an ice statue of the player Maurice Richard and the circus room has a bear and seal.
In the lobby music is playing, people are sitting on iced chairs and couches and, somewhat surprisingly, there is even a fireplace. Normally it would be lit, but now there is no fire, because it has been raining too much during the last few days.
The Snow Village seems to interest people but it is still too early to say, whether or not the village will become a permanent tourist attraction.
– It depends on how this season goes. If it goes well, there will be another village next year. This year the theme has been Montreal, if we build a snow village in 2012, the theme is New York, Fugère reveals.