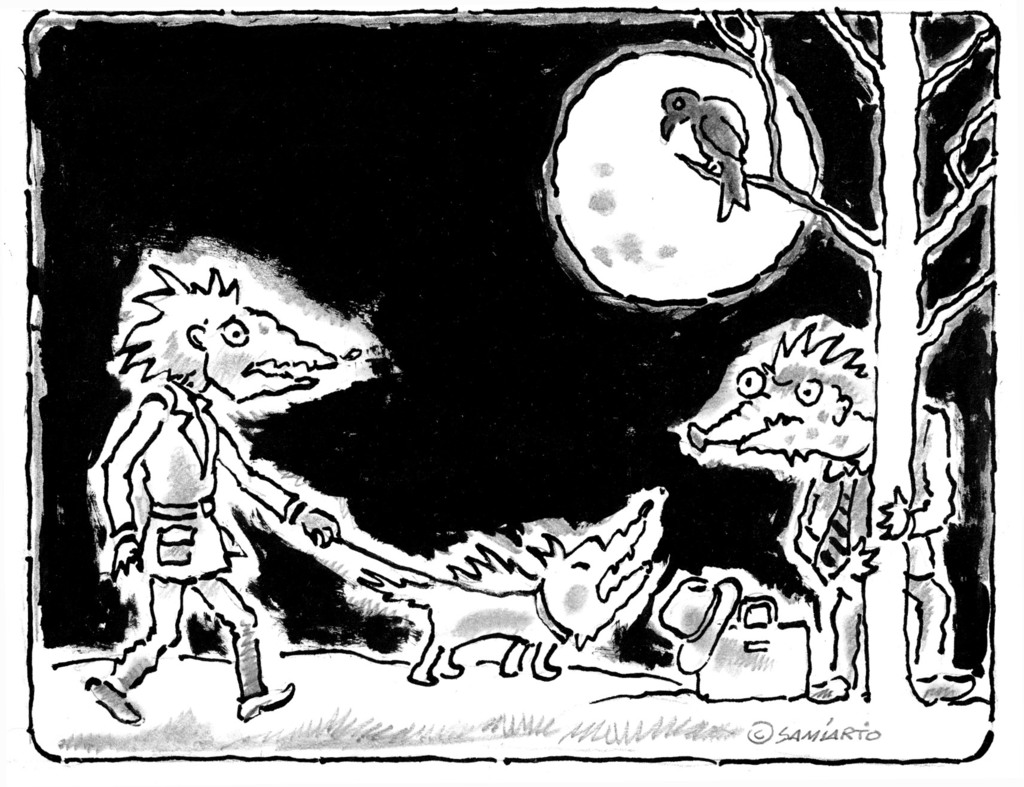 The full moon shining in the sky in one of those wonders that goes unnoticed by nobody. It's staring us like an eye of Cyclop. It causes a tide phenomenon, but does it also induce lunacy as they claim?
When the full moon is on the sun and moon are on the opposite sides of the earth and the illuminated side of the moon faces us.
During the new moon the moon is stationed between the earth and sun and we can see its eclipsed side - or actually due to this, we can not see it.
Most people consider the full moon period the days when the moon at its largest. And many of them will feel the affect of it inside their bodies. People can not sleep or experience nightmares, some feel like their blood is fermenting, still some make strange decisions out of the blue or behave otherwise restlessly.
One barbershop owner told that when approaching full moon in the calendar, to his shop entered the most peculiar clients telling the weirdest stories ever.
The same applies to the other professionals. The police acknowledge that the jails tend to be fuller because of more frequent pub fights and domestic arguments.
And when the full moon is on first aid clinics are busy with strange accidents and sudden fights. People act erraticly without being able to explain why.
How many of us have suddenly felt an urge to buy an ugly laced dress, a book about African folklore or a walking stick with a snake's head, which we will never need or want to use?

One newspaper noticed that always at the time of a full moon or right after they are deluged with strange letters to the editor.
They believe it's mainly because "fullmooners" are awake and consequently have time to read the paper more thoroughly. And since full moon has made them moodier and more excited their rebate reflects accordingly in their letters.
In search for a scientific explanation one suggestion could be water. Our human bodies contain 71 per cent of water, and if moon can move bodies of water so why not shake the water system in people as well?
Full moon superstitions have prevailed strong in different societies centuries after centuries. Moon has been connected to the love stories, especially in the movies romance and full moon go hand in hand. But full moon has been linked with bad spirits, werewolves and broom-riding witches as well.

But can moon's gravity forces affect one's mental balance? Again, there's no proof of moon craziness, because there's no a staunch meter to measure it.
The National Geographic magazine once made an extensive research about the case, but it was found for every positive result there was at least one negative to repeal it.
But why is a crazy person called lunatic and his or hers state lunacy? Well, it's derived straight from Latin word luna meaning moon.
Pet owners have witnessed how their dog and cats behave more restless once a month. The cats tend to scratch and dogs bark or howl more easily during the full moon and farmers have noticed that cows in barns move around unexplained.
Finnish and Chinese are the only languages I know where all the months are called "moon". We say Tammikuu, helmikuu, maaliskuu, etc (kuu=moon) and in Chinese yi yue, er yue, san yue, etc. The only exception in English is honeymoon.

When something happens very seldom, we say "once in a blue moon". The moon is said to at its bluest in August while in winter it's more grayish. Moon is waxing or waning. What other thing waxes, except for maybe a waxed floor? Or what else is sallow like moon?
When Neil Armstrong entered the moon surface, did he feel it was waxing or sallow while trundling around the craters?
The moon is the only natural satellite for the earth. The rest are manmade, like communications, weather or even spy satellites.
Moon circles the globe every 29 days, 12 hours and 44 minutes, so in fact it takes close to thirteen lapses per year. But since thirteen is not a lucky number, the year's months have been set to twelve that's more of a Biblical number.

Full moon has inspired many songwriters. It's golden or like a silver coin, or a midnight miracle. The moon whispers, smirks or blinks, it is fabulous, curious, mystic or majestic.
Little kids are taught that moon is made of cheese. For the Creek it
S probably Feta, for the French Roquefort and the Dutch Emmenthal, since it has holes just like there are craters on the real, majestic moon that make our lives sometimes so peculiar.