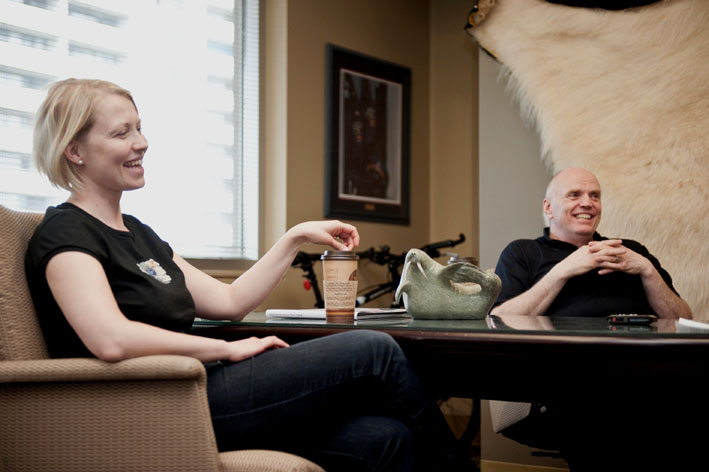 Vern White, 52, Chief of Police of Ottawa is at crossroads regarding his future. One of the potential positions is no less than the Commissioner of the RCMP, highest-ranking job for any police officer in Canada. He is also preparing his second doctoral thesis and is quite enthusiastic about teaching, which he has been doing for 12 years as Adjunct and Part-Time Professor. There is also a third option. He might retire in a few years time from the his present position and move to Finland with his Finnish wife Sari Musta.

– For now, I’m quite happy with my present position.
Chief White knows the RCMP well after spending 20 years as a Mountie in the High Arctic communities and as Assistant Commissioner at the RCMP Ottawa headquarters.

– I’m used to snow and freezing temperatures and I know about Finland by reading regularly the English web site of Helsingin Sanomat , White mentions. He had been to Finland even before the wedding in Oulu, Sari Musta’s birthplace. The couple will soon be packing for another flight to Finland. White will take a Finnish immersion course at the Oulu Summer University next month.

– I hope I will eventually speak Finnish as well as Sari speaks French, quips White, a bi-lingual police officer, who also understands inuktitut.

Meeting in Ajax
Sari Musta is former Social Worker of the Liminka Reform School. The Finnish-Canadian romance began in Ajax in 2006. Musta spent a month on an excursion trip to Canada sponsored by the Rotaries and met White “on purely professional matters,” as she clarifies. He had been Chief of Police of the Durham County since leaving the RCMP in 2005. Something clicked immediately since they started to write to each other.

Musta was studying in London, England, for two years and graduated as Master of Social Work in 2009. As Ottawa Police Chief since 2007, White had an official assignment in London in 2008 and, not surprisingly, he met Musta again. They started to think about continuing their life together in a serious manner. Musta moved to Ottawa after her graduation.

Sari continued her career in Ottawa last August, working with adults with developmental challenges.
During the two years they have lived together, they have travelled to Australia and India where White had been invited to teach at universities. He has B.A. in Sociology and Psychology from Acadia University at his home province of Nova Scotia and Masters Degree from Royal Roads University in B.C. in Conflict Analysis and Management. His doctoral thesis was on Restorative Justice.

– When we move to Finland, I hope to find some opportunities to teach in English. I don’t expect to learn Finnish well enough to teach in that language. I have one benefit derived for my knowledge in inuktitut. The inuits pronounce every letter as it’s written like they do in Finnish.

Wedding in Oulu
Sari Musta, which translates, by the way, “Sari Black”, and Vern White got married in Oulu last December. Among the guests and relatives witnessing the event were White’s colleague, Chief of Oulu Police, Ottawa Deputy Mayor, and some friends from Britain and Germany.

– I felt Vern has something very special. His immense strength and fragility at the same time, great sense of humour even in serious situations and strong presence are an appealing combination. White admires Musta’s ability to help so many people in so many different difficulties.

– We are still planning to have a child together, says White, who has two children, 21 and 23 of age, from previous marriage.

Soon, the recently “Finlandized” Vern White and Sari Musta can have a sauna bath together.
– I bought a sauna heater, a wall unit, in Oulu and brought it back as luggage, White tells.