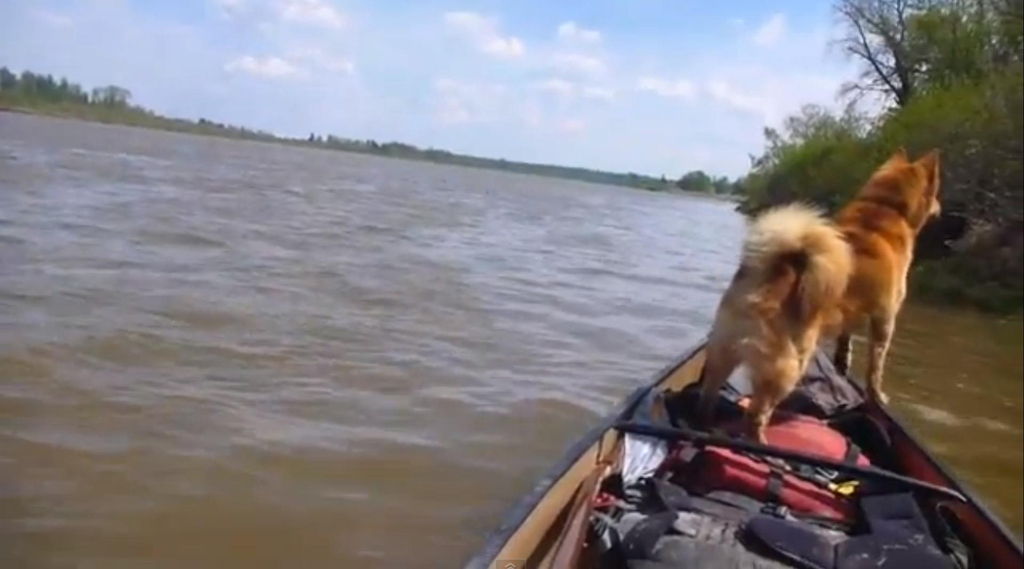 The strips on water route from Rocky Mountain House, Alberta to Montreal are well known and well traveled both by Native voyageurs in the past and recreational canoeists of today.

However, Mike Ranta is the first person to ever travel the entire route of 5400km by himself. In a few months his name will be added to the Guinness book of world records holding that title. Accustomed paddler started his journey in April after the ice had let go and arrived in Montreal September 12.
–I grew up with the son of Don Meany, who had been a member of the Ontario team that raced across Canada as part of the Canadian Centennial in 1967.
A race, that has been called the longest canoe race in history. Don would always brag and tell stories about that trip. At that time the seed was planted and I have always dreamt of doing the trip.

There have been others who have tried to conquer the voyage on their own. Their story did not end as well, some where never found.
– I knew this was not going to be an easy passage. My father has taught me to listen to and respect the nature. Throughout the way, I made sure that no risks were taken and I didn´t suffer any injuries on the 5 month journey.
A man of the wilderness does not trust the electronics when navigating. Ranta carried no GPS device but used only map to keep on the track.
He did however have a video camera with him to tape greetings to home along the way and make a video blog as a keepsake for himself and many others who followed his path on the internet.

Any packing was kept to minimum since extra weight would not help paddling and there just was not room in the canoe.
Mike Ranta tells how he has almost grown up in a canoe. He can´t even remember his first time in one, that is how young he was. His Finnish father would take him along to his trap line to catch beavers from very early age on.

Protected by a friend

– I am very social and I like to share stories with people. The big aspect of the trip was getting used to the solitude, that can be mentally rough. The longest period without any human contact was 18 days in Saskatchewan, Ranta tells.
To prevent home sickness he had laminated pages of phonebook from his hometown, that he would flip through and see all familiar names.
– The generosity and hospitality of people I met along the way was just incredible.

People would paddle by my side short strips and bring me food and drinks or they would encourage me along the shores with their cheers.
Mike Ranta did not have to travel all alone though. The tight space of his canoe was shared with his Finnish spitz named Spitzi, who has gotten used to canoe traveling already as a puppy.
– Spitzi was my best friend on the journey. It protected me from the dangers with her instincts, Ranta thanks his furry friend.
– Outside of Thunder Bay I was just about to go ashore, when Spitzi suddenly started to bark and pull me away from my paddle. I do not know what she saw there, but I thought it was better to trust her. She also drove away a bear from our camp on three occasions.

"Giving up is not an option"

The youth of Ranta´s home town, Atikokan, had a special place on the trip. Fundraising went towards building them a youth house.
– I did the journey for my home town, and especially for the youth there. I want to show them that nothing is impossible even though you would come from a small town. You just have to trust yourself and your dream and decide to never give up.
Ranta himself did not think about giving up one time, although there were some difficulties on the way. He says that part of this had to do with his Finnish stubbornness.
– Lake Superior was definitely the most dangerous and unpredictable part of the journey. Even though I have a lot of experience in canoeing, and learnt a lot from nature from my father, there was nothing I could have done to prepare myself better.

Less than a month after returning home Ranta already has his next voyage planned out. – I feel this ended too short, says Ranta from his work place at the oil drilling rigs. – In about three years I want to paddle from Vancouver to Cape Breton Island.
A route from British Columbia to Nova Scotia is about 8000km long and Ranta thinks it would take him about six months to reach the destination.
– This journey has been a very positive experience for me and hopefully to others who have followed my path online or otherwise. I had a lot of fun and regained the view of how much goodness and beauty there is in this world. Sometimes those things are forgotten, ponders the happy traveler.