The sky is the limit 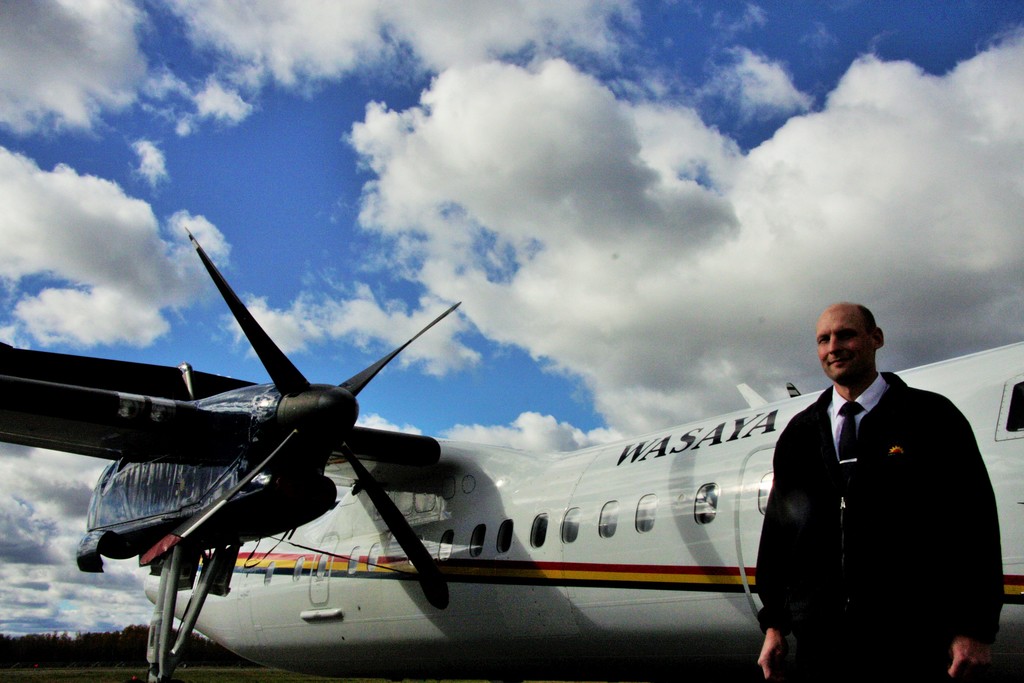 Thunder Bay Airport at 4 o’clock in the morning. That’s a familiar sight to dozens of people heading to work every morning. Ville (Will) Tuokkola is one of them ‒ with the exception that he actually flies the plane.
Ville Tuokkola works for Wasaya Airways. Once a day, he flies a passenger plane to Musslewhite mine and back. There is a small bush road to the mine, but travelling by plane is the only practical option for the workers to reach their destination.
As a first officer, Tuokkola’s daily routine includes making a flight plan, checking the weather, and calculating the weight and balance of the airplane.  The flight plan contains detailed information about the flight including the altitude, wind, and travel time. There is also a plan for how to reach an optional airport in case they are unable to land at the destination.
Before departure the captain does a walk around to check that everything is ready for the flight.
‒ Usually the captain flies to the destination while I keep in contact with the air traffic control or other aircraft in the area via radio. On our way back I fly and the captain takes care of the radios.

Reaching for the sky on a daily basis

Being a pilot is a dream job for many people. But how is it like to fly above the clouds every day? Do you get used to it? Does it ever feel the same as driving to work by a car every morning?
‒ In a way it does, just a few more switches to flick and gauges to keep an eye on. After awhile it feels like any work and things become routine. There are times though, when you get to enjoy a spectacular sunrise or the northern lights, which always makes me appreciate this job.
Weather conditions are one thing that makes variation to the days.
‒ In the summer you have to avoid thunderstorms. Most days are normal though. In the autumn and spring there’s sometimes freezing rain that you have to be aware of. In the winter the weather is usually good – cold but good!

Planning to be a missionary aviator

As a child Ville Tuokkola didn’t dream about becoming a pilot. Instead, he got the idea six years ago.
‒ After having graduated from Summit Pacific Bible College I worked in several kinds of jobs for a few years. I prayed and asked for God’s guidance in my life. Then I got this dream:  to work as a missionary aviator.
After that Tuokkola gathered information about how to actually become a pilot.
In 2009 Ville Tuokkola started flight training in Abbotsford, British Columbia. First he needed to get a Private Pilot’s License, which is used to fly light, single-engine general aviation aircraft privately and recreationally. Then he got his Commercial License so he could fly for a company. In total, all this took a bit less than a year ‒ and over a hundred flight lessons.
Tuokkola started working for Wasaya soon after that. He first worked as a ramp attendant, with the hope of getting eventually trained on an aircraft. This is a fairly common way to get started in the aviation industry in Canada. One year later he started flying.
What are the future career plans for Ville Tuokkola?
‒ We will stay in Thunder Bay for a few more years, at least as the children are still small.
Then it’s time to start looking for options to work as a missionary aviator.