The Clan is back! 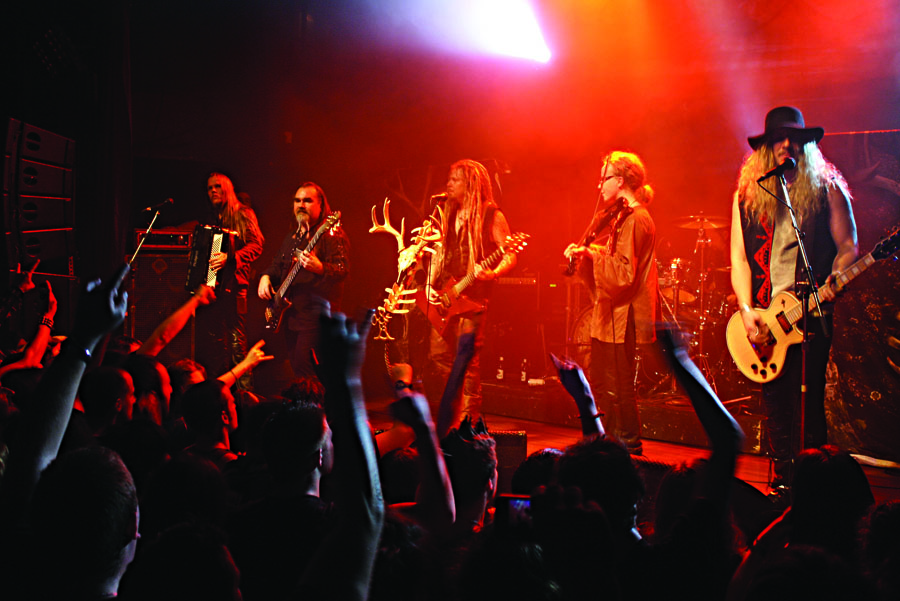 Base player Jarkko Aaltonen and singer Jonne Järvelä are sitting in the tour bus, drinking beer and getting ready for the gig that is about to begin in a couple of hours. Alcohol and beer especially are a crucial part of the imago of the band and form a base for the lyrics.
–You start noticing it at this age that we have done our share of drinking, says Aaltonen. He does admit that despite the rough image, one can take a break and is allowed to not drink on stage.
The career of the band combining metal to folk music and instruments has been on a steady ascent according to Järvelä. Last year they were touring 140 days out of Finland. - Pretty well for someone who still has a day job!, Aaltonen laughs.

The last album, Ukon Wacka, was released in February. Despite that, after the tour the band is determined to go back to studio.
– People often wonder the pace we make albums, which is almost one per a year. In the 80s it was common to come out with a new album every year. Things have changed in the music business and maybe the bands have gotten lazier too, men wonder.
– Songs come easily and I like to compose, so why not, says Järvelä.
The two first albums were made mainly in English. After that, the language has changes into Finnish.
– We were not planning it deeply, it just happened. But I have to say, that it does feel more personal to be singing in Finnish. I feel I get more emotion in the songs that way, Järvelä says.

International fans do not seem to mind the language.
– I have no clue what they are singing. But it does not matter, says a local fan Sarah. – We got familiar with the band when they were playing at a metal music cruise in January. They have a unique sound and they sing about alcohol, that is enough to know.
– The music is fun, it makes you dance, concludes Sarah´s friend Ivan.
As common these day, a lot of the audience found Korpiklaani in the internet while listening to other bands from similar genre.
- I´m sure our English songs have helped the interest and success. But even after the change of
language the fans have stuck with us, Aaltonen says.
– Actually we did not became more known in North America until our Finnish albums came out.
Lyrics are not the only part of music though, the band reminds-
– We have good songs, melodic chorus, and a sing along feeling at our gigs. The songs are made and they are performed in all honesty. That brings credibility, no matter what the language, Järvelä says.

The tour is the third one for the band in North America. During this they also have one gig in Mexico. Although the biggest fan base is in Central Europe, also the amount and persistence of the fans on this continent has been a surprise to the band.
– Of course the venues and audiences here are smaller, but it does feel awesome when in a concert for example in the US the audience is yelling the Finnish lyrics as hard as they can. Sometimes I just have to stop singing myself and just listen to it. It truly feels great, says Järvelä.
After the very last song of the gig is done, the black wearing crowd is still demanding for more. Järvelä grabs the mic one more time and thanks the audience sincerely.
"Last year we promised we would be back. Here we are, and we want to thank you for coming back as well. Next year we will be here again. You are the best we could have! "
Looks like the clan has once again gotten new members, that danced themselves sweaty to the rhythms of accordion, violin, and electric guitar.