Discovering Sibelius through the ears of an expert 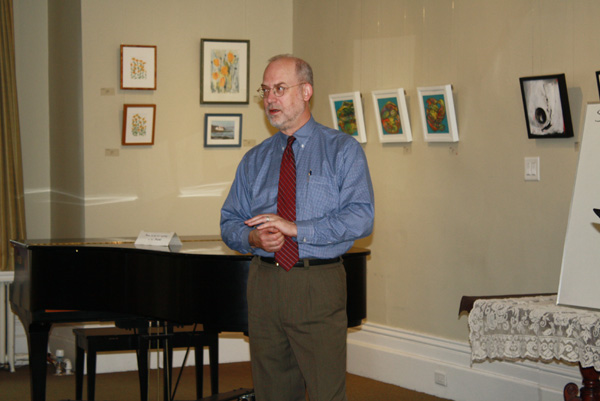 Classical music specialist Rick Phillips presented a seminar on Sibelius focusing on his Violin concerto and the Tempest. Seminar was a third one Phillips has done for CFF.
Music writer, musical tour guide, concert host and former CBC classical radio host is accustomed lecturer on several composers. He tells that he has a specific interest and love for Sibelius however.
During his years of covering classical music competitions for radio, he once had to listen to Sibelius´ Violin concerto eight times in a row.
– With any other composer I could not have done it. Sibelius has something in his work that makes me go back to it over and over again without getting bored.
Phillips describes Sibelius to be a composer of his own league, without similarities to any other European composer.
– His style is rugged and rough, without fine elegance. It is like chainsaw art. His works are based on logic and simplicity. They start with a simple idea that grows into something big.
According to Phillips a lot of the music is inspired by the norther nature and it is especially the people of the northern countries that find Sibelius´ music fascinating.

Many of the members in the audience told they had been invited to be present by CFF´s Ron Walenius.
– I love music but I´m not that familiar with Sibelius. From this talk and the example pieces I got a lot more depth into the listening experience, says Tony Mizgala. – A part of the attraction is learning from Rick Phillips, who is an expert on his field, Mizgala continues.
– I was surprised how well I recognized parts of Sibelius´ music. I started off with rock´n roll when I was young. Now I have grown into classical music!, says Mary Wentz.

It was the English and Shakespeare studies of CFF:s Burt Rairamo where the idea for the second part of the lecture was found.
– I was studying Tempest, which was the last play of Shakespeare. The play inspired Sibelius who wrote music for it, separate sections for each character. That music was along with Tapiola, Sibelius´ last works.
I thought this link between the geniuses would be a good topic for Rick, who knows a lot about music, Rairamo tells.
Phillips is excited about the connection between the men, both experts on their own field.
– All that creativity that comes with long careers and life experience of old men connects these men.

Sibelius tried for years to finish his eight symphony, but in a burst of a self criticism ended up throwing the sketches to flames.
This fall some orchestral pieces were found in the National Library that are thought to be parts of the unfinished eight symphony. The Helsinki philharmonic orchestra has played these sheets of music and they definitely are recognizable Sibelius.
– Maybe this break through will be an idea for my next lecture, says enthusiastic Phillips.
During his three hours articulate and competent Rick Phillips was sure to give a lot to think about and a lot to listen to for both the classical music enthusiastic and someone who has never heard Sibelius before.
During the days after his talk there must be Sibelius playing in quite many home stereos of the audience members. Probably there will also be some new notions of his music.
The lecture was organized by CFF Education Foundation and the funds were raised towards the Finnish department of University of Toronto.

3-Day Flash Sale! Get 10% Off (+ 5% for full cases) for stock items using coupon "flashsale" on Jan 17, 18 or 19. We are located in Vancouver area and carry the most popular and traditional Finnish…Continue